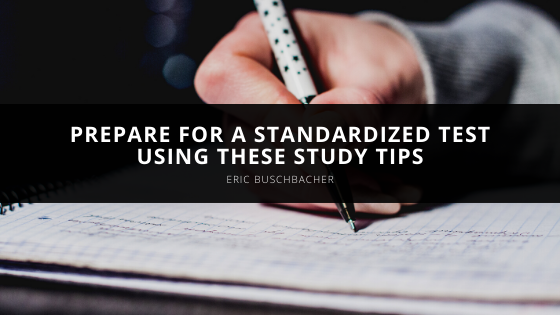 According to Eric Buschbacher, high school students can ace their upcoming standardized tests by using the right study techniques.

Standardized tests are used to help colleges determine which students they would like to accept for admission. Many high schoolers feel the weight of their future on their shoulders as they compete against thousands of others for a coveted spot at their dream university. Although test scores are not the only factor used to determine admission, they do play a significant role in the process. Eric Buschbacher, a graduate from St. John’s University in Queens, New York, explains various study techniques for standardized testing.

The first step is to determine which test you will take and the format it will be given in. Eric Buschbacher recommends researching the specifics like how long it will take, what type of questions will be asked, and how to get a good score. If you become an expert on the test, you’ll feel confident and prepared. You can do this by buying premade test-prep guides, talking to your instructors, and by talking to other students who have already taken it.

Next, Eric Buschbacher recommends figuring out if your test is based on knowledge or aptitude. Knowledge-based tests will require that you know specific information to pass and are often used for lawyers who need to pass the bar exam or doctors who need to prove they understand medicine. Eric Buscbacher explains that aptitude tests, on the other hand, measure intellectual skills that require both knowledge and problem-solving.

While it’s important to learn as much material as possible, Eric Buschbacher notes that there is more to the practice than meets the eye. Instead of reviewing notes, cover answers and try to answer them on your own. The skill of retrieving information will be more useful than the skill of recognition. Also, Eric Buschbacher recommends studying to understand, rather than studying to memorize. Once complex ideas and methods are understood, you can use logic and reasoning to find the correct answer during the test.

Success for standardized tests greatly relies on consistent and timely preparation. Eric Buschbacher believes that starting early and spacing out study sessions is essential. A long-term study schedule will work much better than trying to learn everything in a month or two. Cramming is not useful for standardized tests since they cover a wide array of information in a variety of formats.

Don’t be afraid to start taking practice tests right away. Eric Buschbacher explains that they are a great way to track progress and discover what areas you need to work on. Always take the practice test in the same format as the real test, thoroughly answering all essay questions with the same materials in the allotted amount of time. According to Eric Buscbacher, practice tests will make you feel more prepared in addition to helping you learn the material.

Finally, set yourself up for success by getting a good night’s rest before the test. Eric Buschbacher recommends eating a hearty nutritional breakfast and arriving early to account for any issues. Do not spend the morning cramming or stressed, as it will not help you perform better. Instead, head into your exam calmly and confident in what you have prepared for.