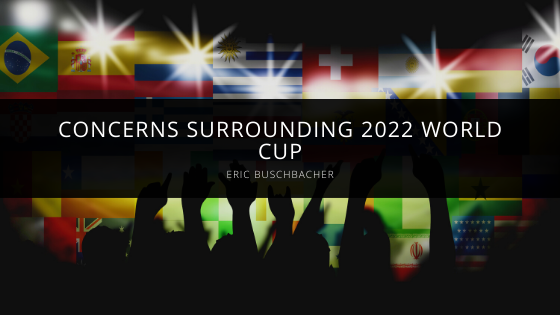 Qatar is set to host the 2022 World Cup Games¸ concerning many, according to Eric Buschbacher.

The 22nd edition of the FIFA World Cup is set to begin on Monday, November 21st, 2022. Many fans worldwide are criticizing the decision for the football games to be held in the Middle Eastern country of Qatar after concerns, controversies, and allegations surfaced.  Eric Buschbacher notes that even some FIFA members feel it was a mistake to award Qatar the opportunity to host the tournaments, yet, plans push forward.

To avoid the unbearably hot summers of Qatar, the 2022 World Cup Games will take place in winter, competing with the European domestic football calendar. Although other teams have had to adjust schedules or sacrifice players for the traditional summer world cup, Eric Buschbacher notes that most players in the tournament come from Europe.

Additionally, Qatar won a bid to host a summer tournament meant to take place from June to July. Qatar’s proposal did not mention changing dates, only that they would use solar power to cool stadiums. Despite their efforts to cool the lower regions of the stadiums for players and fans, complete acclimation to Qatar’s climate will be impossible. Eric Buschbacher explains that the heat may still affect the player’s performance as they travel and rest outside the stadiums.

Qatar is also strictly ruled by Sharia Law, which prohibits most freedoms and does not match the world’s progressive beliefs. Alcohol is not permitted in public. Although football fans will have designated areas to drink, beverages will be expensive and may put international travelers at risk if they violate Qatar’s strict policies. Homosexuality is also forbidden and punishable by imprisonment or death.

Twelve new stadiums are being built in time for the tournament, including a new city surrounding the area for international guests. Eric Buschbacher explains that fast construction comes at a devastating price for human life, however. Low paid migrant workers are facing abuse, exploitation, and slavery. It is estimated that around 4,000 construction workers will die before the World Cup begins.

The country will spend a staggering $220 billion on stadiums, facilities, and transport infrastructure. In comparison, South Africa spent 60 times less when they hosted the 2010 World Cup Games. To manage rapidly growing costs, the small country of Qatar now wants to build only 8 of the 12 stadiums that were initially planned. Eric Buschbacher notes that the designs of these stadiums are said to be small with unfavorable layouts.

Finally, there is little football culture in Qatar, which is ranked 109th in the world by FIFA. Although this seems minor compared to the other issues, Eric Buschbacher believes it plays a role in Qatar being unfit for hosting the games. They are known for recruiting players from other countries instead of training their own, and paying migrant workers to watch events, so the stadiums are not empty.

The United States was the runner-up for hosting the 2022 World Cup.

After completing an associate’s degree in business, Eric Buschbacher earned his bachelor’s degree in Business Management from St. Johns University in Jamaica, NY. He is now an eager young professional looking to develop new skills in a challenging work environment.

Eric Buschbacher is also an avid sports fan that played competitively in basketball and soccer. He enjoys rooting on the Giants, Knicks, and Yankees in addition to watching top European athletes compete in the Euro and World Cup. In his spare time, Eric Buschbacher enjoys going to the gym to work on strength training